Murry’s Inc., a family owned and operated company based in Lebanon, PA., mixes an old fashioned “can-do” attitude with a dedicated and experienced workforce to automate their operation and reduce costs.

As a 60-year-old company, Murry’s has had to make many changes in both their product and in their manufacturing operation. “As a company we are always able to adapt,” says Tony Lucci, senior vice president, Murry’s. “We used to be known for our steaks, but as the market has shifted, we have changed and now our French toast sticks are our biggest seller.”

But designing a line to automate the packaging operation was not easy. French toast sticks are a difficult product to handle because they do not lay flat in the package. Murry’s wanted to maintain their shelf presence in the retail outlets and keep the footprint of their carton consistent. The company packages three carton sizes on the line, 7-, 12- and 16-ounce weights. While the footprint is the same on all the cartons, the height of the carton varies with each size.

When Murry’s first began processing French toast sticks, about 15 years ago, the packaging was done manually.

In bringing the new line on board, Murry’s took a phased approach that made sense for their business by bringing in the new equipment over a two year period. “When we were looking to automate the line, we looked at two different companies. We settled on Bradman Lake for several reasons–the simplicity of their machines, faith in the salesman and the people at the company,” Lucci says.

Using carton designs originated by the Bradman Lake engineering group in Rock Hill, SC, Murrys switched from expensive to produce pre glued and folded cartons to less expensive flat blank versions which are lock formed on Bradman Lake HS double head formers. Carton sizes do vary considerably depending upon the weight of the contents being packed but this is no problem for the HS former because it incorporates one of the largest size ranges in the industry. The operation of the machine uses all mechanical drives and is very easy to operate, adjust and size changeover.

Most of the products produced by Murrys such as frozen French toast sticks and chicken pieces are packed into polyethylene bags first. The bags provide protection for the sticks, but because of the brick-like size and shape of the frozen sticks, the bags need to be oversized and are larger than the carton they have to be loaded into. To get the entire bag into the carton, the robot picks-up the bags of frozen French toast sticks in the center of the bag, so when top loaded into the carton, the corners of the bag fit. This reduces the need for workers on the line to fit bags into cartons.

The automatic bag loader to pick and place these bags of product into the carton was developed by Bradman Lake in partnership with Rockwell/Allen Bradley and was an extension of our existing product Toploader technology. Filled bags of product are transferred automatically into fast indexing pockets of a turbo train. When they reach the unloading station a predetermined number of bags are picked up out of the pockets are transferred across and placed into the open bases of a line of assembled cartons. The pick and place action is a servo motor driven, linear slide, motion.

After the cartons are loaded and the bags are placed inside the base, the package is then transferred to Bradman Lake’s IL120 carton closer. Filled cartons pass from the transport conveyor and are fed into the carton closer. The lid covers are plowed down over their bases and the carton is then gently gripped between the two overhead conveyors consisting of a series of rubber fingers and two base slat band conveyors.

The rubber fingers, Bradman Lake’s patented Flexible Carton Control (FCC) technology, help to square up and control the carton, eliminating any bowing of the carton before closing. The front flap of each carton is sealed with hot melt adhesive and the cartons are turned through 90 degrees.

The cartons are then transferred into the second section of the machine and the end flaps are plowed down to the base walls and sealed. Bradman Lake uses a hot melt glue system that has no fumes, works on a lower operating temperature and increases energy efficiency.

Once, closed, the cartons are transported to a work cell where they are automatically collated and loaded inside corrugated shipping cases. Again, this case packing operation was designed and implemented using Bradman Lake machinery in conjunction with other machinery suppliers. Pre made corrugated cases are automatically erected and bottom sealed using a machine already owned by Murrys. They are then automatically conveyed into the Bradman Lake case packer are lined up in a single file ready for loading. Fully loaded and sealed cartons are controlled in a single line and a predetermined number are picked up by vacuum using a multi axis ABB robot are then loaded into the selected case. Layers of cartons are loaded into the case until it is full. At that stage the filled case is transferred to a corrugated case top sealer where the top flaps are sealed but then it is transferred to the palletization operation. 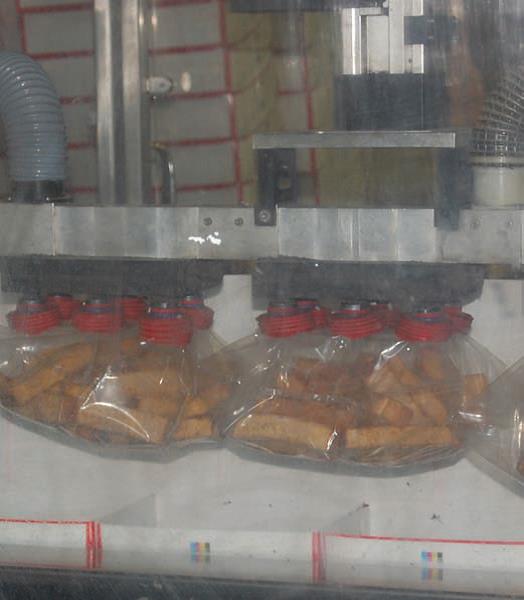 Laying out the line

The line layout is extremely compact and creative. Bradman Lake worked with Murry’s to install two lines, side by side in a limited amount of space. One line is used for French toast sticks, the other is used for other products such as chicken wings, but is flexible enough to be used for French Toast if needed.

The project started out with a straight line design, but once it was decided to separate the erecting, loading and closing operations to reduce bottlenecks, they needed to get creative in order to fit all the required equipment into a tight space. Bradman Lake designed the line layout and the team at Murry’s did the installation.

“The equipment supplied by Bradman Lake was not over-engineered. We have a very ‘can do’ maintenance department with a lot of knowledge. They took ownership of the equipment once it was brought in,” Lucci says. More than half of the team at the plant has been there over 10 years and many over 25 years, an unusual accomplishment in today’s manufacturing environment. Changeover from one size carton to another is streamlined with change parts designed by Bradman Lake.

“We run our French toast sticks line five to six days a week, two eight hour shifts, with no major downtime,” Lucci says. “The equipment has modems built-in, so Bradman Lake can help out with any issues as needed.

Murry’s pushes the machines to capacity. “When you look at the numbers we are doing, we are exceeding the limits of the machine by eight percent,” Lucci says. The bagger is the area of constraint—the line cannot operate any faster than the bagger can weigh and fill the sticks.

Murry’s was able to take advantage of their experienced workforce, a good partnership with their supplier and a ‘can do’ attitude to achieve the success they have had with this packaging line. “The line is designed to produce 18,000 to 25,000 pounds of French toast sticks a shift, we are getting 35,000 pounds a shift,” Lucci says. It has not only met expectations, it has exceeded them.

Once installed, the automated line cut labor costs in half and increased line production by 40 percent or more. Murry’s was able to realize a return on their $1 million investment within 12 months. The new line also allowed the company to change their carton and reduce material costs as well. The company is saving more than 15 to 20 percent in material costs by going from a glued carton to an unglued carton and also eliminating the shrink film.

This new line also allowed Murry’s to change from a six-corner pre-glued, beer-style carton with an overwrap, to a folding carton that does not require the overwrap. The new line also eliminates the need for pre-glued cartons.

Murry’s can now use carton blanks that are set-up on a Bradman Lake carton former before being filled with the bags of sticks. Bradman Lake worked directly with the material suppliers to ensure a smooth transition to the new carton format. As Murry’s packages several private label brands, as well as their own brand of French toast sticks, they realize about a 20 percent savings on the carton and eliminating the overwrap.

Close
This site uses cookies. By continuing to browse the site you are agreeing to our use of cookies. Find out more here